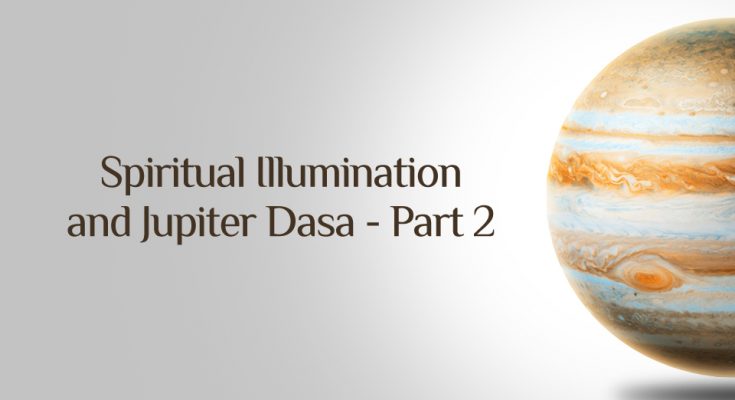 Jupiter, the Soft-hearted
The Acharya’s birth occurred in a traditional Vedic Brahmin family of Advaita scholars in Rahu Dasa. Rahu in the 2nd does not help finances. Worse, he is with 12th lord Venus. Circumstances were indigent, as it usually happens in families which place spiritual goals above all else letting go mundane considerations. Saturn in the 9th though excellent for spiritual propensities rarely supports Bhagya or material prosperity. The father was a humble school teacher and the mother, a simple housewife.

Mercury is in the Ascendant aspectedby benefic Jupiter. These two influences on the Ascendant made the Acharya a soft-hearted pleasant natured child who never got into fights that are part of the growing up years of boys. Always willing to help, he even took on the harsh punishment meted out to a playmate on himself as he could not bear to see the friend in pain. However, Mars as the Ascendant lord in the 10th aspecting the Ascendant makes for boldness and grit and great physical energy. The Acharya seldom tolerated bullies and would take them on easily if only to protect his meeker friends. A considerate child, he never failed to lend a helping hand to his mother in her chores. This is basically traceable to the influence of Jupiter who as a Sattwic planet, if unsullied, generously bestows Sattwic qualities on the native. 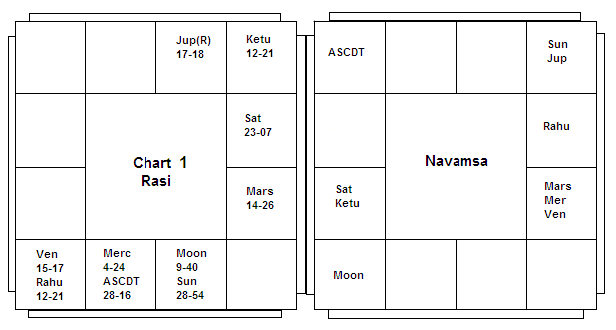 Jupiter’s powerful influence on the chart saw the Upanayanam of the Acharya take place in unususal circumstances on May 4, 1930. It so happened the senior Acharya of the Sarada Peetam, Jagadguru Sankaracharya Sri Chandrasekhara Bharati, was looking for a suitable successor when the young Acharya’s horoscope was brought to him by a devotee as a possible choice. Perhaps the chart appealed to the master for a senior attendant of the Math immediately took upon himself the responsibility of arranging for the boy’s Upanayanam (initiation into the Gayatri Mantraj’ at Sringeri. It was an unsought blessing descending on the Acharya’s family. Transit Jupiter was in Taurus influencing natal Jupiter, the 2nd and 5th lord, the 5th standing for Mantra Diksha.

The Upanayanam came about in Moon Bhukti of Rahu Dasa in Sun Antara. Rahu in the 2nd is in Sagittarius reflecting the results of his sign-dispositor Jupiter. He is in Moola Nakshatra ruled by the Kaivalyakaraka Ketu who very significantly is placed in the 8th house of mysticism and esoteric knowledge. The Moon as the 9th lord in the 12th is always supportive of auspicious events. The Antara lord Sun is of course the deity propitiated by the Gayatri Mantra one receives at one’s Upanayanam. Once at Sringeri, the young lad decided he would stay on there to learn Sanskrit, rather than go back to school which would only equip him to find a job for a living.

Purvapunyastana and Sanyasa
The next major event came a year later on May 22, 1931 when the Acharya was initiated into Sanyasa and anointed as the 35th pontiff of the Peetam. Jupiter Dasa was about to begin. The Dasa was of Rahu who in the 2nd should reflect Jupiter’s results. The Bhukti of Mars was on. Mars as the Ascendant lord is in the 10th with Digbala and has obtained Vargottama Navamsa. In the 10th as Lagna lord, he becomes capable of conferring Raja Yoga carrying authority and power, both of which vested in him the moment the anointment took place.

A diligent student, the Acharya never complained of any inconvenience. He devoted himself heart and soul to the study of scriptural works. Even as he progressed at lighting speed in his studies, his spiritual advancement kept pace with it. Jupiter as Dasa lord provided the right conditions and opportunities for Vidya. As a benefic 5th lord, he conferred on the young initiate not only the rare advantage of the tutelage of an illumined master but also the benefit of training under some of the best traditional scholars of the day.

The aspect of Mars on Mercury, both being placed in quadrants individually as well as mutually, and Mercury benefiting also from the aspect of Mars as his sign dispositor, made the young Acharya a past master in Tarka Sastra or the science of logic.

Enlightenment
The week between December 10, 1935 and December 17, 1935 was a highly significant one when the Acharya’s spiritual efforts culminated in reaching the highest state of enlightenment and which state continued throughout the rest of his life. This period coincides with Jupiter Dasa, Saturn Bhukti both planets, by ownership and occupation respectively, predominantly suited for such an event. Transit Jupiter (Chart 2) was on natal Ascendant in Scorpio aspecting both Dasa and Bhukti lords. Transit Mercury too was in the Ascendant in Scorpio during this eventful period. Venus was in Libra, the Ascendant lord Mars was exalted, Rahu and Ketu were across the natal Nodes while Saturn was in Aquarius, his Moolatrikona sign. This unusual positioning of planets in favourable signs both individually and in relation to natal positions acted as a trigger facilitating the unique Experience in the teenage seeker. 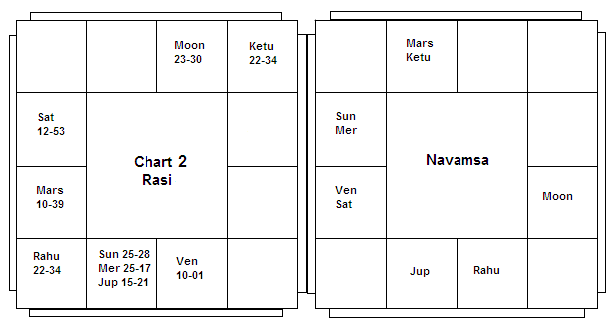 Role of Fifth Lord
A spiritually potent chart generally finds its potential surface in the Dasa of the 5th lord. And this upsurge continues to get strengthened as the Dasa unfolds. If such a Dasa does not operate in one’s life time, then though there may be streaks of spirituality, it is unlikely to predominate or take control of one’s life. In this case, Jupiter Dasa which began just as the Acharya was stepping into his teens unlocked the great store of spirituality hidden within. The position of the 5th lord in a Kendra aspected by Mercury added to the spirituality dormant in the native. In fact this Experience was so owerful that according to authentic sources, the young Acharya touched the pinnacle of spiritual pursuit within less than 2 years after coming into the fold of the senior pontiff.
Interestingly, this occurred on Margasira Pournami in the lunar Yuva on December 10, 1953 with the Sun in Scorpio and the Moon in Taurus. The Moon as the 9th lord was not only exalted but in full digital strength in Taurus in all brilliance when the Acharya plunged into this Ultimate Experience which, it is said, never left him thereafter. The Moon is aspected by the excellent benefic Gnanakaraka Jupiter. The weekday was a Tuesday ruled by the Ascendant lord benefic Mars, exalted in transit, and being placed in the 10th house of achievements in Chart 1 signaling the attainment of the Highest. The eclipses in 1935 occurred across the natal Nodal axis. Usually eclipses occurring on natal Rahu or Ketu, natal Sun or natal Moon tend to mark epochal stages in the lives of spiritual people. The planets on this date are all in great dignity as if contributing to the Experience, each in its own way.

The Epochal Experience came about in the periods of Jupiter and of Saturn, the latter occupying the 9th. There are very few specific Yogas for spirituality and renunciation in this chart. But the individual dispositions of the planets are such as to point to the great spirituality of the native, starting with those of the Atmakaraka and Manahkaraka, the Sun and Moon respectively in the 12th from the Ascendant.

Raja Yoga
According to Varahamihira,
If the 9th is occupied by any planet, the person becomes a Dikshita (initiate when he is born in Raja Yoga)(Brihat Jataka X-4).

According to Jataka Parijata, If the occupants of the Gnana – 5th, 4th and 2nd and the 10th Bhavas as well as the lords of the 1st, 9th, 10th be possessed of abundant six-fold strength (Shadbala), the person born will be conversant with the six sciences and know all the Vedas and will receive initiation in the sacred knowledge. In the Dasa and Bhukti of the lords of the 9th, 10th and Jst Bhavas, or of Mercury and of Jupiter, he will become a mine of sacred knowledge and science securing to him the benefit of performing sacrifices of all descriptions and all kinds of benefit of performing The Raja Yoga, the strongest of its kind, in this case is sourced in the position of the Ascendant lord Mars in the 10th house. Mars gets friendly Rasi, Vargottama Navamsa, friendly Hora of the Sun, friendly Drekanna of Jupiter, own Chaturtamsa of Scorpio, own Saptamsa of Scorpio, friendly Dasamsa of Jupiter, exaltation in Dwadasamsa, friendly Shodasamsa of Pisces and friendly Trimsamsa of Jupiter in Sagittarius. In other words, he gets Vargottama Navamsa, one exaltation Varga, 2 own or Swavargas and 5 friendly or Mitravargas. Therefore, Mars as Ascendant lord attracting so many favourable Vargas becomes extremely potent to confer Raja Yoga in the 10th house.

Ascension to Pontificate
Saturn Dasa, Venus Bhukti saw the senior Acharya Sri Chandrasekhara Bharati voluntarily shed his body on September 26, 1954. These two planets in 6-8 positions in their periods led to the conferring of a full- fledged Raja Yoga on the Acharya with his succession to the pontificate on October 16, 1954. The natal Moon was under the influence of transit Saturn in Libra coming under sadesathe. The Acharya had enjoyed a strong bond with his master. The blow temporarily disturbed his composure (consistent with transit Saturn in Janma Rasi) which however the young Acharya soon regained.

On September 21, 1989, in Ketu Dasa, Saturn Bhukti, the Acharya shed his mortal coils plunging thousands of devotees into deep sorrow. Ketu in the 8th is a Maraka aspected as he is by the 7th lord Venus. Saturn is not a strong Maraka by lordship or occupation but as Karaka for physical death brought the curtains down on one of the greatest spiritual masters of the century.