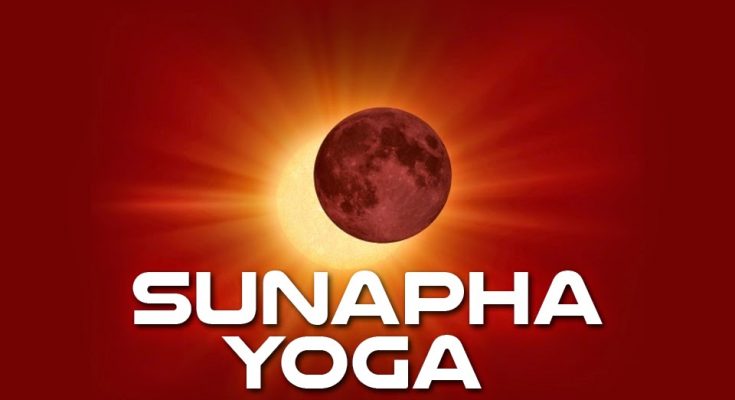 When the second house from moon sign is occupied by a planet other than the sun the Sunapha yoga arises. This yoga bestows upon the native status, huge wealth, and capacity to earn his fortune, religious inclination, virtuous pursuits, and quiet nature.

The exact nature of this yoga will depend upon the nature of the planet or planets causing this yoga. Several varieties of this yoga thus arise depending upon which planet occupies the second house from the moon, and whether it is a single occupant or has other associates. Astro-Vision’s LifeSign ME Standard – A Professional Horoscope and Remedies app, To find out the specific combinations in the birth chart causing the yogas and tells about their influence in life.

In a person’s Rashi if there is a presence of Sunapha Yoga, it will result in earning huge financial gain, wealth and prosperity in his life. The person will be intelligent; his intellectual skills will be much appreciated and get him lots of fame. The native of this yoga will lead a life of a Ruler or King or somebody equivalent to that post like a commander.

When planet mercury is made with Sunapha yoga, that person will be holy. He will possess skills in Vedas and Music. This kind of person is inclined to poetry. He will also have a pleasing personality and good looks; people will adore him for his skills. If planet Jupiter makes Sunabha yoga, that person is likely to be a teacher of Science.

5 Comments on “Sunapha Yoga in Astrology”