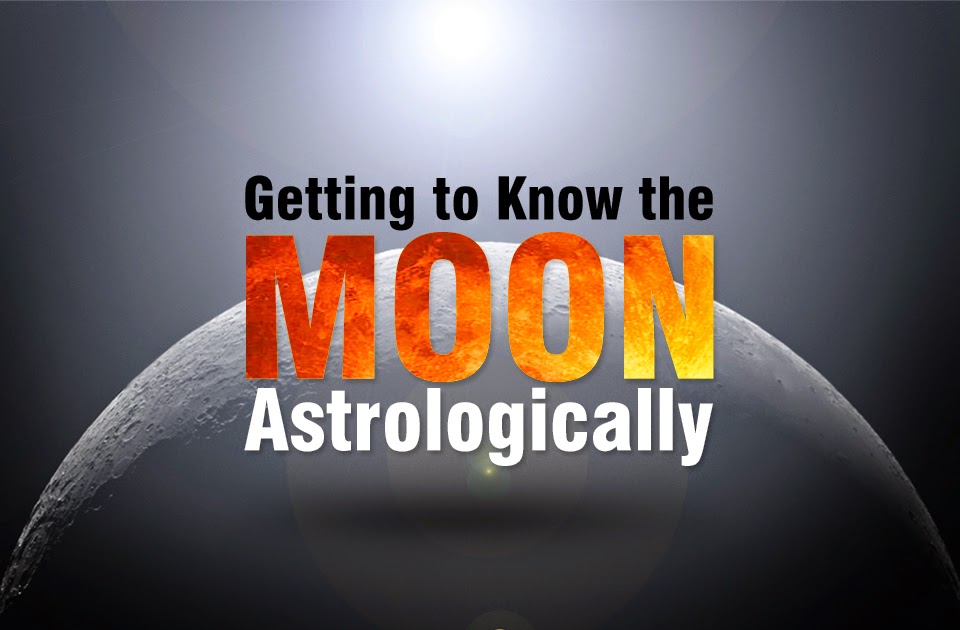 The Moon, the planet nearest to the Earth, is also the only planet in the solar system which revolves round the Earth. The Sun is the generator of power whereas the Moon is the conductor of the power lent by the Sun. The Moon shines only by the reflected light of the Sun.The Sun gives the spirit and life to all planets and the Moon rules all life on Earth. The Sun represents individuality whereas the Moon shows one’s personality. The Moon also represents the mother. The Moon is feminine. Hence one coming under the rulership of the Moon becomes timid, vacillating, receptive and easily swayed.
Those ruled by the Moon are usually sensitive, emotional and domesticated with a love for home and kindred. They meet with many ups and downs in life. They are quite receptive and mediumistic and frequently possess musical talent. They like water and natural beauty.
If the Moon is not favourably disposed, one may be either too easy going and given to self-gratification and over indulgence in eating, drinking or pleasure or too changeable, negative and uncertain. Nurses, cooks, confectioners, grocers, gardens, matrons, dealers in liquids, stewards, clerks, companions and in other occupations of the common public or of a fluctuating nature come under the Moon.
The Moon is considered a benefic and the waning Moon, a malefic. Ruler of the sign Cancer, the Moon is exalted in Taurus and debilitated in Scorpio. The highest exaltation point is 3 Degree Taurus and the lowest debilitation point is 3 Degree Scorpio. The first 3 Degree of Taurus constitutes the Moon’s exaltation portion and the remaining 27 Degree, Moolatrikona.
The Moon in the 1st house makes one very handsome but unsteady mentally. One will suffer from bodily troubles and be happy in watery places. One will travel much in the 15th year. The Moon if in the Ascendant in Aries, Taurus or Cancer, makes one well-versed in Sastras (scriptures), wealthy, happy and soft-spoken. One will have soft skin and strong build but he will not be intelligent. If aspected by benefics, will be powerful, wise, intelligent, healthy and a clever conversationalist. If the lord of the Ascendant is weak, one will suffer from ill-health.
The Moon wanes and waxes and signifies the mind (Manakaraka). If in the Ascendant, it makes one unsteady. When the Moon is in Aries in the Ascendant, he will be lord of the 4th in the 1st. When in Taurus, he will be exalted as the lord of the 3rd in the 1st. When the Moon is in Cancer he will be in own sign in the Ascendant. The effects of these dispositions are one will be well-versed in Sastras, wealthy, happy, a king. One will be soft-spoken with a strong body but not intelligent. This may hold good as far as the Moon in Aries and Cancer as Ascendant is concerned but one cannot accept that the same will be the case with Taurus Ascendant. According to Bhavartha Ratnakara, the Moon in Taurus Ascendant is not particularly good for giving wealth. The Moon should also be waxing (or Full Moon) to give good results in full. The Moon in Scorpio, Libra, and Pisces in the Ascendant can also be good because he will be the lord of the 9th, 10th and the 5th respectively.
The Moon has been assigned a pivotal role symbolizing the psyche or the mental component. The conscious and the subconscious levels of the mind, emotions, mental inclinations, and likes and dislikes are all under the sway of the Moon. Among the more important significations of the Moon are mother, intelligence and prosperity.
People born on a Full-Moon-day have a natural conflict between their emotions and ego. In contrast, those born on a New-Moon day have surprisingly little inner conflict. They tend to be introspective and spiritually inclined. Interestingly enough people born when the Sun and Moon are 900 apart (Ashtami) are likely to display low-levels of effort and lack of discipline almost akin to the lack of activity in the oceans on Ashtami. The trinal and sextile soli-lunar dispositions seem to bring about constructive and harmonious attitudes.
The Moon governs impregnation, conception, the birth of a child, the animal instinct, union, and the embryo. It also rules the infant stage of life and has a powerful influence on it. The afflicted Moon at birth causes ailments frequently and does not allow proper growth.
Those ruled by the Moon generally have a fair complexion and charming eyes. They are plump and short in stature and walk with a rolling gait.
The Moon’s influence is said to be cold, moist, phlegmatic fruitful and convertible in nature according to his position in the chart and the aspects and location in the Zodiac (by sign). The Moon’s proximity to the Earth and rapidity of motion render him a powerful significator in all branches of astrology.
The Moon rules liquids, freshwater, milk, public commodities like groceries, fish, drinks, etc., also sailing, brewing, nursing, and females generally. The Moon influences the growth of all plant life and governs the brain, breast, left eye of the male and right eye of the female. Monday, silver, color white, pearl, and other white stones are ascribed to the Moon.
A powerful Moon situated in the Ascendant confers a handsome personality, makes me virtuous, loving in disposition, wealthy and renowned. The Moon in the Ascendant in a fiery sign makes for courage, ambition, firmness and idealistic outlook. In Aries Ascendant, there is a tendency to be rash and fool-hardy.
The late N.T. Rama Rao (Chart 1), former chief minister of Andhra Pradesh, and a highly successful film star had a powerful and well-placed Moon in the Ascendant giving rise to a variety of auspicious Yogas conferring distinction and lifting him far above average. 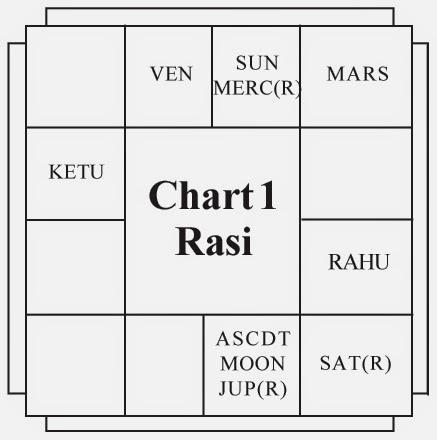 Rabindranath Tagore (Chart 2) had the Karaka of the mind Moon who is also lord of the 5th not only unafflicted but highly fortified in the 1st house conferring on him an intuitive and receptive mind, fruitful imagination and an ingenious and observant nature. 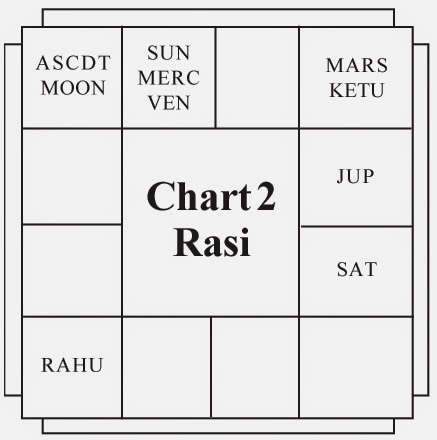 Thus a powerful and well-placed Moon in a birth chart is as much relevant for good health and longevity as for wealth and prosperity. The sign disposition of the Moon is very important. Fiery signs tend to make one prejudiced, short-tempered and mentally alert. Earthy signs especially Taurus, make one conservative who like safe and well-tested methods and display a lot of patience and perseverance.
Airy signs give tremendous mental ability which sometimes gets wasted due to indecisiveness and an inability to concentrate. Watery signs give an intensely emotional nature. Strong affections and persistence are typically present when the Moon is in Cancer or Scorpio. In Pisces, however, it gives a weaker personality than Cancer or Scorpio but a more religious nature. Any affliction can turn the religious nature into self-serving hypocrisy.
The organs of the body ruled by the Moon are the arteries, nerves, brain, and stomach. In females, he rules the uterus, bladder, breasts, and ovaries. In the natural Zodiac, he owns Cancer sign and the 4th house. When he is weak, debilitated and conjoined or aspected by malefics, he destroys the significations of the 4th house — education (especially acquisition of degree), mother, conveyance, residential house, landed property, intelligence, and agricultural gains.
The Moon is strong when endowed with Pakshabala, that is, from the 11th day of the bright fortnight to the 5th day of the dark fortnight. A Full Moon has maximum Pakshabala and hence in fully benefic. According to Devakeralam Chandra Lagna is Sareera and Lagna is Prana. It is by the examination of these two that Nadigrantas offer a prediction.
The Moon is bereft of strength from the 6th lunar day of the dark half to the 10th lunar day of the bright half. The Moon is considered good in the 1st, 5th, 9th, 10th, and 11th houses. He is moderate in the 2nd, 3rd, 4th, and 12th houses when one is attracted to others’ wives and luxury. He gives bad effects in the 6th and the 8th houses. These effects are general in nature and get modified depending upon the Ascendant and the planetary placements.
According to Brihat Jataka, the Moon in a Kendra (angle) to the Sun gives weak intellect, in succeeding houses (2nd, 5th, 8th, and the 11th), medium intellect and in cadent houses (the 3rd, 6th, 9th, and the 12th) good intellect. When any planet (excluding the Sun) occupies the 2nd, the 12th or both houses from the Moon, Sunapaha, Anapha, and Durdhura Yogas respectively are produced.
One born in Sunapha Yoga will have property, wisdom and wealth. Natives born in Anapha Yoga will be strong, wealthy, famous, blessed with material comforts, well dressed, contented and happy. Those born in Durdhura Yoga enjoy life and are blessed with an abundance of wealth, vehicles and attendants.
A mother loves all her children and is inimical to none. Likewise, the Moon is no enemy to any of the planets, which is why he is the significator of the mother.

3 Comments on “Getting to Know the Moon Astrologically”