The importance of Bhava has been stressed upon since ancient times and astrologers in earlier times used the Bhava chart with good results in both mundane and horary astrology. But in present times, the Bhava chart is ignored and people go by the Rasi and other divisional charts. Astrological principles say the Bhava chart is always to be studied with the Rasi chart, aspects are always to be seen in the Rasi chart, Papakartari to any house must also be seen from the Bhava and not from the Rasi chart alone. Raja Yogas are based on planets in relation to Bhava charts or Rasi charts, so they must be seen accordingly. The conjunction is always to be seen from the Rasi chart but sometimes two or more planets in the same Bhava but holding different Rasis may be said to be in Bhava association. It means the planets are in one Bhava but the Bhava has two Rasis merged together. Lordships are to be taken from the Bhava charts because it has been seen people born in higher latitudes have their lordship changed in the Bhava chart and this cannot be ignored as it is an astronomical fact.
I have used the Bhava Chart as per Sripati Paddhati which is the same as per the Bhava-Sadhana chapter of Brihat Parasara Hora Sastra. The Surya Siddhanta also endorses this method according to what Varahamihira says in his Pancha-Sidhantika.
I would like to stress that the Rasi chart is bound to give appreciable results irrespective of the change in planetary positions in the Bhava chart. Therefore, it is a subject of research on how we should merge the results of planets that have moved in the Bhava chart from their respective positions in the Rasi chart. There have been cases of Pancha Mahapurusha Yoga found in the Rasi chart but the planets move from Kendra positions to the adjacent Bhavas thus nullifying or weakening the Yoga. So is the case with Neechabhanga, where the planet causing Neechabhanga would be in a Kendra but sometimes found to have moved away in the Bhava chart thus the depriving a planet of the cancellation benefit. The potential of Raja Yogas must also be seen in the Bhava chart.
Chart 1: Virender Sehwag: Born October 20, 1978 at 2h 45m. at 28 N 40, 77 E 13.

Cricketer Virendra Sehwag (Chart 1) has 4 planets, including the 10th lord and none of them being combust, in the 3rd Bhava, which according to some classics is a Sanyasa Yoga. The picture becomes clear in the Bhava chart where Venus goes into the 4th Bhava thus cancelling this Sanyasa Yoga. But there are other factors which lead him to detachment as Saturn in the Ascendant aspecting the Ascendant lord Moon and the Moon-sign lord Venus. Saturn Dasa will bring detachment though its foundation would be laid in Jupiter Dasa itself.
The shifting of Venus to the 4th Bhava has strengthened the Neechabhanga of the Sun making the Yoga more powerful. Rahu Dasa gave the results of the Neechabhanga Raja Yoga Sun as Rahu is in the Sun’s Nakshatra. The Dasa of Jupiter would not give fruitful results as he is in the 12th Bhava and may see the end of the Sehwag era soon. The Yogas for detachment are strong in this horoscope.
Chart 2: Amitabh Bachan: Born October 11, 1942 at 16h. 01m. at 25 N 27, 81 E 51. 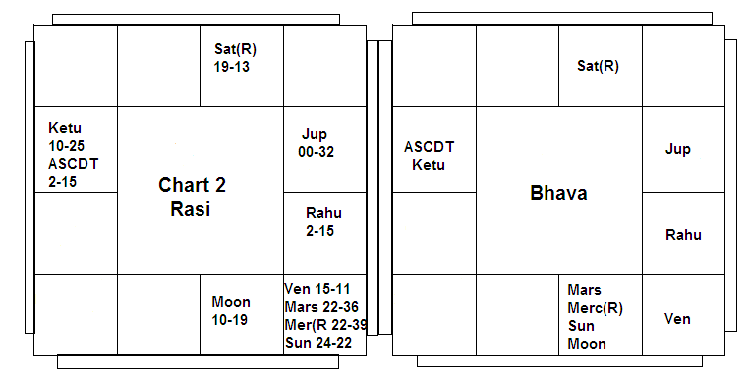 In the case of film actor Amitabh Bachan (Chart 2), the 5th and 7th lord in the 9th Bhava and the Moon and Mercury also in the 9th Bhava shows that his father was prominent in he literary field and to some extent he himself has this ability of writing poems. The 9th Bhava has to be prominent for such activities. The picture becomes clear in the Bhava chart while from the Rasi chart, the combination shows ill- luck and early death of the father.
Chart 3: Judicial Magistrate: Born February 14, 1977 at 2h. 35m. at 26 N 13, 78 E 10. 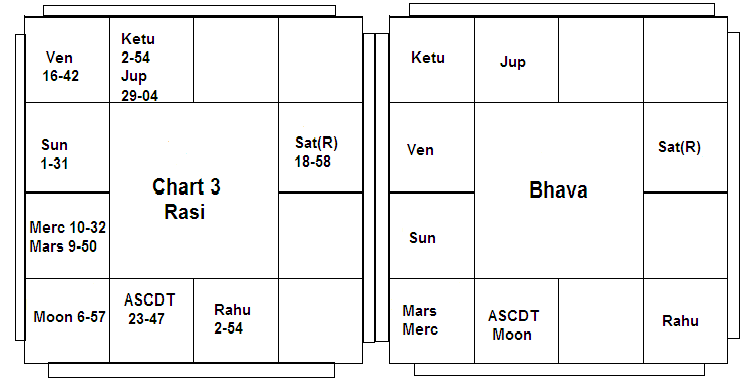 Chart 3 is of a judicial magistrate who qualified through examinations for the post. The 10th lord Sun is in the 4th in his debilitation sign in Navamsa. The 6th lord Mars aspects the 10th with his 8th house aspect. In Bhava, the lordships have changed. Virgo rises on the 10th cusp which rules courts, litigation etc. The 10th lord Mercury conjuncts exalted 6th lord Mars aspected by Saturn. In Navamsa, Mercury joins a Martian sign aspected by Jupiter. The native’s selection came in Sun-Venus periods. In Bhava, the Sun becomes the lord of the 9th (judiciary) and Venus forms a Malavaya Yoga in the 4th Bhava. The Malavaya Yoga has indeed strengthened the chart. She got married to a judge. Take the 7th Bhava as the Ascendant of her husband. Exalted 6th lord Venus is in the 10th and 10th lord Jupiter in 12th (Aries) aspected by 9th lord Saturn (combinations for judiciary).
Considering the Rasi chart alone or only the Bhava chart may not yield complete results. A planet gives results of both Rasi and Bhava positions and a good astrologer must be able to judge precisely.
Courtesy: Modern Astrology (Birjesh Singh)

3 Comments on “Importance of Bhava”