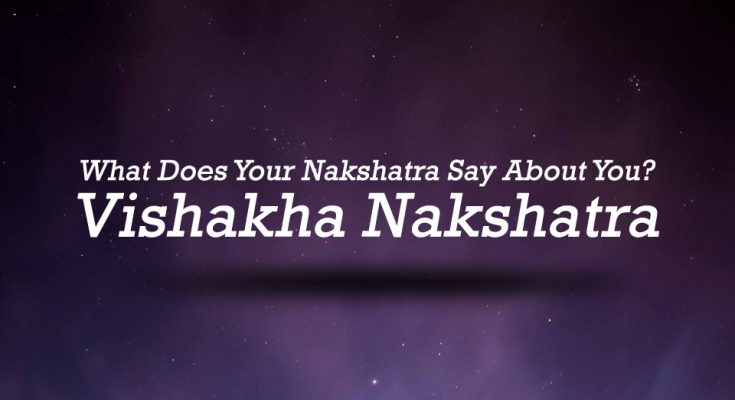 Extended from 20.00 degrees Libra to 03.20 degrees in Scorpio is the Nakshatra of Vishakha. Its ruling planet is Jupiter and the symbol is a triumphal arc. The presiding deity is Agni. This 16th Nakshatra of the zodiac has got another name Radha, and it complements the next Nakshatra Anuradha. Radha is known as the birth star of Surya. Arms and the Breasts are the body parts related to this Nakshatra.

In the Mahabharata, Markandeya Samasyaparva describes a story of a baby being born from the brilliance of Siva, of which Indra is afraid. The baby named Guha/Skanda raises a loud cry which makes all the Devas trembled with terrible fear. Indra throws his thunder-bolt on Skanda, which results in the birth of a goat-faced youth from the right side of Skanda and he is known as Vishakha. It is been believed that Guha and Vishakha are merged in Skanda.

The Star “Vishakha” is considered to be very auspicious, great people like Buddha have born in this Star. Muruga born in this Star is referred to as Gnyana Pandita, which denotes the authority on wisdom. Karthikeya and Vishakha incidentally represent the 3rd and 16th lunar mansions of the Zodiac. Vishakha is a binary star as per Sanskrit literature. It denotes both the intellectual and spiritual qualities with complete vitality. Also, it qualifies to lead a life of truthful existence.

Lord Muruga, also known as Skanda or Karthikeya is the chief commander of the great divine army, a fine, dynamic soldier of the within, a fearless defender of righteousness.

These people have a lot of virtues like Intelligence of the highest order, bright appearance, attracts others, clever, has respect for intelligent and spiritual people, enterprising, self-satisfied, determined, gets things done, humanitarian, politically inclined, can appear soft but is very powerful underneath, excellent communicator, persuasive speech, leadership qualities, truthful, sexually alluring, a good mate in marriage, benefits through marriage, traveling and through change, mathematical talent, courageous, and they are powerful achievers.

1st Pada of Vishakha Nakshatra from 20° 00′ – 23° 20 ′ Libra falls in Aries Navamsa and is ruled by Mars. Due to the Martian influence, people belong to this padha will have energy, impulse, and very high social ambitions.

2nd Pada of Vishakha Nakshatra 23° 20′ – 26° 40′ Libra falls in Taurus Navamsa ruled by Venus. Since Venus rules the comforts and happiness these people like Endurance and durability. These people are quite artistic and love to enjoy life to the core. They are very much inclined to the materialistic part of life.

3rd Pada of Vishakha Nakshatra 26° 40′ – 30° 00′ Libra falls in Gemini Navamsa ruled by Mercury. Due to the mercurian influence, they love to go for higher studies. Most of them prefer to be in the teaching profession too. Fields related to education and training will give them good exposure.

4th Pada of Vishakha Nakshatra 00° 00′ – 3° 20′ Scorpio falls in Cancer Navamsa ruled by Moon. This is the most pointed of all Vishakha’s padas. AS Moon represents the mind and emotions, there can be serious thoughts going in the mind which makes these people very emotional. They can be interested in mysterious subjects like a mantra and tantra.

Previous: What Does Your Nakshatra Say About You? – Uttara Phalguni Nakshatra