Notes on the Moon

The Moon is a powerful centre of energy radiation in a horoscope. It is even said that after one completes 32 years of life, all predictions must be based on taking the Moon as the Ascendant. Ancient texts have given an account of Yogas or specific combinations formed by the Moon. A resume of some of these will be of great value in interpreting horoscopes.

If a planet other than the Sun is in the 2nd house from the Moon, it is called Sunapha Yoga. A similar situation for the 12th house is named Anapha Yoga. If both the houses are occupied by planets other than the Sun, it is Durdhura Yoga. The results of these Yogas can be found in almost all classical works on astrology.

When there is no planet in the 2nd and 12th houses from the Moon, it is called Kemadruma Yoga, one of the worst combinations. This Yoga is not auspicious. One is given to duplicity and double standards. Gaja-Kesari Yoga arises when Jupiter is in a Kendra from the Moon. This makes one good, virtuous, generous and capable. One becomes famous as a constructive or creative power.

Sakata Yoga arises when the Moon is in the 6th. the 8th or the 12th from Jupiter. Poverty, misery, and loneliness are indicated. But according to Parasara and others, this Yoga arises when all the planets are in the Ascendant and in the 7th. When all benefics are in the 10th from the Ascendant or the Moon, it is Amala Yoga which gives fame, righteousness and Some authorities extend it to the Navamsa position of the Moon also. This Yoga is negated when one of the following is present: (i) if there are Chandra Yogas; (ii) if there are benefics in the 3rd, the 6th, the 10th and the 11th from the Moon; (iii) if the Moon and Venus are in squares aspected by Jupiter: (iv) if the Moon is in his own or in exaltation or in a friendly sign in Navamsa; (v) if the Moon is with benefics in the Ascendant: (vi) if, for Leo Ascendant, the exalted Moon is aspected by Jupiter; (vii) if there are planets in Kendras from-the Moon; and (viii) if in Navamsa, the Moon has planets other than the Sun on either ‘ side.

Yogas for Wealth – Get the free modern astrology updates

There are some Moon-specific Yogas too. The conjunction of the Moon and Mars is called Chandra-Mangala Yoga. Some take it to include the Kendra positions and even their mutual aspects prosperity.

When the Moon is exalted or is in his own house and is aspected by Jupiter, it is Gauri Yoga Some hold that this Yoga arises when the lord of the Navamsa occupied by the owner of the 10th is exalted A person born with this Yoga is religious, virtuous and blessed with a good family.

According to Reader Mr. Debasish Karmakar of Midnapore: “Generally, the 2nd, 4th. 7th. 8th. 12th houses and Venus rule marriage. The 7th house and its lord are the nucleus of marriage prospects. The 7th house should be considered from both the Ascendant and the Moon. 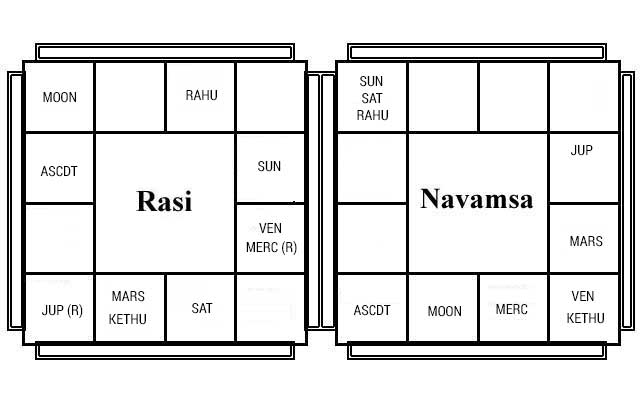 “Venus is essentially the planet for judging marriage prospects. Afflicted Venus delays or even spoils martial matters. Venus in the Ascendant in a fiery sign is said to delay marriage. Here Venus is in a fiery sign and aspects the Ascendant. In Navamsa, Venus is debilitated and with Ketu aspected by two natural malefics Sun and Saturn. Venus in the 7th ensures marital happiness, though he is not favoured here owing to the blemish attached to him on the principle of Karako Bhavo Nasaya. Venus is also in an odd sign which indicates a delay in marriage.

“From the Moon, Venus is in the 6th – not a good position for marriage. Venus in a male sign (Leo) makes the native indifferent to marriage. In Navamsa, Venus is with Ketu.

“The Moon is in Saturn’s Nakshatra and aspected by Ketu (9th aspect). The lord of the 7th Sun and the 2nd lord retrograde Jupiter receive the aspect of Saturn indicating delayed marriage.

“Here both luminaries Moon and the Sun are under the influence of Saturn which again indicates delay in marriage.

“According to a dictum from classics, if the Upapada Lagna (Arudha of the lord of the 12th) is not strong i.e. its lord is weak and afflicted then it can delay marriage or even marriage may not materialize. Here the 12th lord Saturn is on the 10th from the 12th; so, 10th from the 10th is Cancer, where malefic Sun is posited as 7th lord; and the lord of sign Cancer Moon is strongly afflicted.

Know about Importance of Lagna Nakshathra

“So, it is seen that Saturn afflicts the 2nd and 7th lords, Venus, Mars, the Sun and the Moon severely. Wherever Saturn is associated with the 7th lord, 7th house, Venus and Mars considered from both the Ascendant and the Moon, there is bound to be a delay in marriage.

“A female native usually gets married when Jupiter transits her Ascendant, 7th house, the 7th Navamsa or the 7th house from natal Moon whichever is stronger; or when transit Jupiter aspects the 7th house or the 7th lord either from the Ascendant or the Moon. Here transit Jupiter will enter Sagittarius on November 5, 2019, and will stay there for a year. So, marriage will take ace between November 2019 and November 2020.”

The promise of Yogakaraka Venus

According to reader V.S. Karanwal of New Delhi: “This is a case of late marriage only: (i) The 8th lord Mercury is in the 7th house which delays marriage; (ii) The 2nd lord Jupiter in the 11th in own house considered favourable as aspecting the 7th house, is retrograde which adds to more delay; (iii) The combination of Venus and Mercury in the 7th house causes delay usually till 40 years; (iv) Sun in the 7th house is also not favourable.

However (i) the Ascendant lord Saturn exalted in the 9th house is favourable for good luck and marriage; (ii) The 2nd lord Jupiter is in own house in the 11 house and exalted in Navamsa which is good for marriage; (iii) The 9th lord Venus is a Yogakaraka in 7th house and promises marriage in own Dasa running currently. Thus Venus and Jupiter are well placed as regards marriage. Venus Dasa Jupiter Bhukti may bring about marriage during 2023-2024 with amplified good luck.”

According to the reader Mayuresh Risbud of Pune: “The 7th lord Sun is placed in the 6th house, negative to the 7th house, in a friendly sign, and also aspected by Saturn from the 9th house. The 3rd lord (Bhagya or the 9th house from the 7th) Mars is well placed in 10th in its own sign, but the 3rd house is aspected by Saturn and Jupiter (R) which shows a delay in getting a suitable match due to Saturn’s influence. Further, the 5th lord signifying gain of marriage is placed in the 7th house in a friendly sign but is retrograde and, as the 8th lord, signifies hurdles in getting married. However, Yogakaraka Venus in the 7th house shows prospects of marriage. Also Jupiter as 11th lord desire for marriage) in the 11th house shows a desire for marriage and as Jupiter also aspects the 7th house assures prospects of getting married. 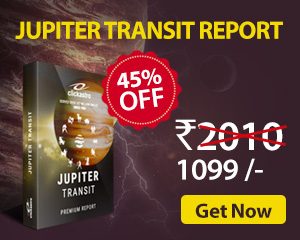 “While considering the question of marriage for a female chart, we must also consider the Sun and Mars as significators of husband. Here the Sun is placed in a friendly sign and shows the husband will be good-looking and handsome and Mars is in his own sign in the 10th signifies a good career-oriented husband.
“The native is now in Venus Dasa and Moon Bhukti. Venus being a Yogakaraka is placed in the 7th house whereas the Moon as 6th lord is placed in 2nd house in 6-8 position with Dasa lord Venus. The Antaras of Jupiter, Saturn, and Mercury- will be fruitful getting married to Jupiter transiting 11th house in Sagittarius sign from November 2019. Hence there are good chances of getting married between November 2019 and March 2020.”

Delay Only, Not Denial

The Dasa of Venus is running and cannot deny her marital life. Rahu Bhukti begins on November 2019. Rahu is exalted in the 4th house in a Venusian sign. Hence, marriage is likely as Rahu Bhukti takes over and transit Saturn moves out of Sagittarius. Since Rahu is in the 4th house, it is possible the lady may have already met her spouse. •