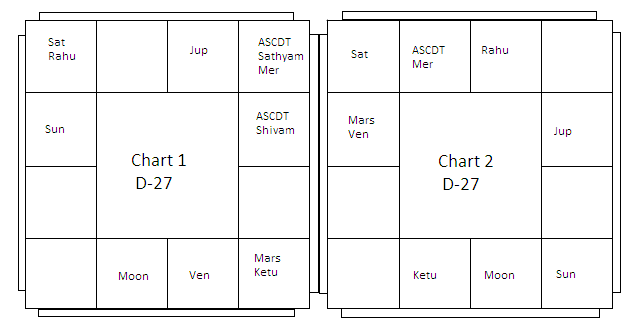 5. Practical Illustrations
Twins-Satyam and Shivam:
Facts: Satyam is very optimistic and has a jovial and amicable disposition. Shivam, on the other hand, is somber and serious. He is a skeptic and has little belief in astrology and such other disciplines.
Satyam : Chart 1 gives D-27. It must be noted that Satyam’s D-27 has Ascendant lord Mercury in the Ascendant, causing a powerful Bhadra Yoga. Mercury is in Jupiter’s Nakshatra. and in a Venusian sign in the Rasi chart and unafflicted in D-27. Thus Bhadra Yoga is powerfully operative in his D-27. This can bless him with optimism and a jovial and amicable disposition. The Moolatrikona is also indicative of such attitudes. Venus also occupies a constellation of Jupiter. The Moon has Neechabhanga. Mercury’s strong influence can cause him to be always happy, helpful to relatives and respect tradition. With the 7th lord in D-27 Jupiter, being in own constellation and Venusian sign, both in Rasi and D-27, he is diplomatic and compassionate.
Shivam: On the other hand, the Ascendant in Shivam’s D-27 is Cancer and the Ascendant lord is debilitated, aspected by the 6th lord. The lord of the 5th and the dispositor of the Ascendant lord, Mars is afflicted by Ketu and he is in mutual aspect with the 7th and 8th lord Saturn. This suggests a serious person in whom a curious mixture of gloom and anger resides. The situation of the 8th lord Saturn and Rahu in the 9th in an aspect with the 5th lord indicates skepticism and it makes sense that he does not believe in astrology. With the 7th lord in D-27, Saturn, being with Rahu aspected by Mars, he may be brash and lack the diplomacy of Satyam.
An Indian Engineer in the USA
Facts: The native of Chart 2 is extremely generous, righteous and noble. He is a dynamic person and comes across as an intellectual. He is diplomatic, but when under pressure, he can turn a little harsh. He turned somewhat pessimistic and angry later on in life, when he experienced very harsh events and those he trusted deceived him and nearly destroyed his life.
Chart 2 gives his D-27. The Ascendant in Aries suggests dynamism. Mercury, the 3rd lord, is in the Ascendant. The lord of the 9th and 12th Jupiter is exalted in a quadrant without any afflictions, giving rise to a powerful Hamsa Yoga and causing Argala on the Ascendant (See 3). So he is very generous, compassionate, righteous and noble, with the 7th house falling in Libra and with a diplomatic nature. However, with the 6th lord occupying the Ascendant in a fiery sign, with Rahu occupying the 2nd and with the 7th lord Venus joining Mars in a Saturnine sign, with Argala from Saturn and Rahu, he is capable of acting in a brazen manner at times. The Sun in the 6th aspected by Saturn suggests proneness to quarrels with authorities. The 2nd house stands for one’s manners. It is Taurus here and it is occupied by Rahu, who also causes Argala to its lord Venus in Aquarius. The 6th house Virgo has the Sun in it and Saturn aspecting it and its lord is in the Ascendant. The said change in his behavior took place during the Bhukti of Virgo in the Dasa of Taurus as per Kalachakra Dasa. Rahu’s Yogini Dasa was running then. The correlations here are interesting.
Bill Clinton
Chart 4: Bill Clinton: Born August 19, 1946 at 8 h. 53 m (6 hours behind GST) at 33 N 40, 93 W 46. 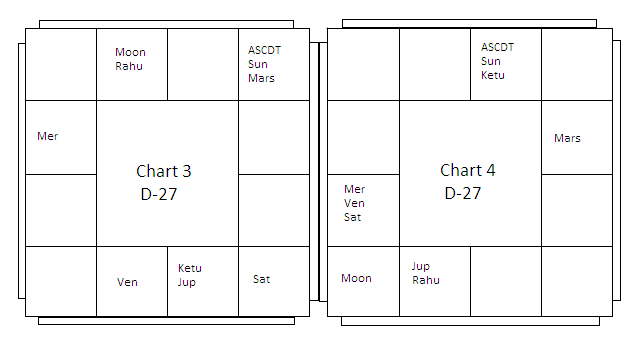 Facts: Clinton comes across as a smart and intelligent person. He is charming and ambitious. He recently “repented” for the “sin” of “misleading” and “letting down” his nation and family on a scandal.
There is a Yoga called Asatyavadi Yoga that comes into effect when the 5th lord is in a sign owned by Mars of Saturn. If primarily Mercury and secondarily, the Ascendant lord and the Moon also occupy such signs, the indications become more intense. Chart 3 may be found to satisfy these criteria. The situation of the Ascendant lord in a Saturnine sign and mutual aspect between Mars in the Ascendant and Saturn may indicate selfishness and aggression.
Despite the 5th lord in a Dustana, aspected by Saturn, and the situation of Ketu in the 5th, Jupiter in the 5th acts as a stabilizing factor as far as emotional stability is concerned.
The 7th lord Jupiter in Libra with an aspect from the 2nd lord Moon suggests diplomatic knack. Venus in Scorpio in the 6th may give him susceptibility to sexual scandals. Interestingly, be was running the Bhukti of Scorpio in 1999 as per Kalachakra Dasa.
An Egoist
Facts: The native is well-known for his achievements in some circles. He lacks diplomacy and he is highly egoistic and self-centered in his social behaviour. But he is religiously inclined.
Chart 4 gives his D-27. The Ascendant contains the Sun who is afflicted by Ketu, Jupiter’s aspect is a saving grace, but Jupiter is a functional malefic. The affliction to the Sun in the Ascendant may make him an egoistic person. Mars is the 12th lord and he is debilitated. So the native lacks humility. The debilitation of the 7th lord and situation of the 8th lord and Rahu in the 7th indicate harsh behaviour and lack of diplomacy. The Moon in a fiery sign, affliction of the 4th lord Sun by Ketu and affliction of the Moon’s dispositor by Rahu in the 12th house from the Moon indicate mental peace may be lacking to a large degree.
On the positive side, the Ascendant lord Venus, Yogakaraka Saturn and the 2nd and 5th lord Mercury in the 9th house form an array of brilliant Yogas. The 10th house falls in the Moolatrikona of the strongest planet in this Yoga, Saturn, and this has paved the way for his good social standing. This Yoga has also blessed him with religious piety, despite the drawbacks of ego.
6. Conclusion
I believe that Parasara considered divisional charts to be as basic an ingredient in the scheme of Jyotisha as are planets, signs and houses. Nakshatramsa, which is not widely employed by contemporary astrologers has been found to shed light on one’s nature, attitude, inherent strengths and weaknesses. Some examples substantiating these observations been presented in this paper. It is hoped learned readers will develop further on these findings and use them for the betterment of the world.
Courtesy: Modern Astrology(P.V.R. Narasimha Rao)

2 Comments on “Nakshatramsa for Personality Clues”