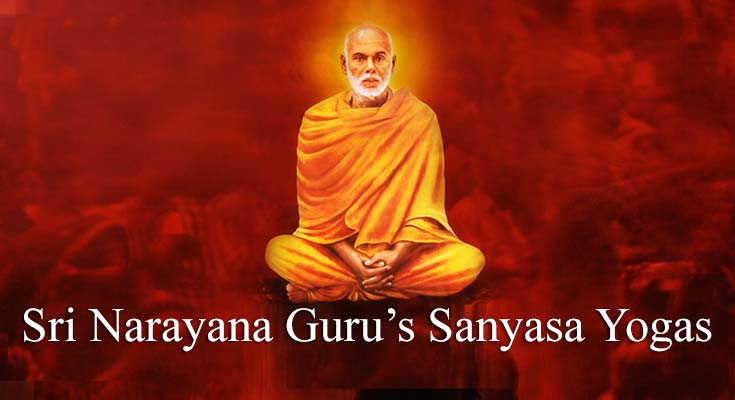 Sri Narayana Guru, a champion of the humble and downtrodden was considered a great saint and reformer by many. He fought against the ill-effects of the caste system and preached “One caste, one religion, One God for all men. 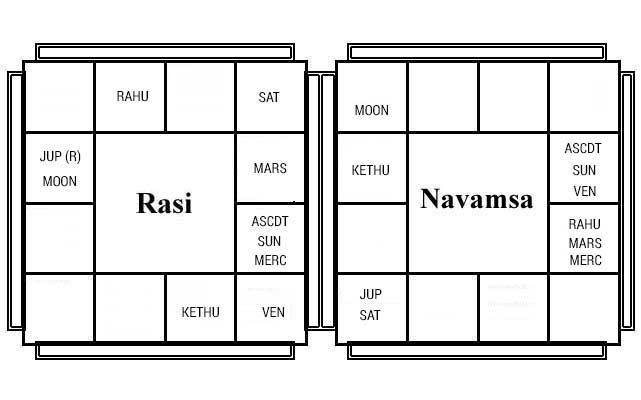 Sri Narayana Guru was born in a small village Chempazhanty near Trivandrum on a Tuesday when the sign Leo* was rising on the Ascendant.

The Ascendant lord Sun☀️and 2nd and 11th lord Mercury form Budhaditya Yoga. It is said that the Guru’s face was always bathed in a bright lustre when he was alive. Both the Ascendant and the Sun are in the Nakshatra of Gnanakaraka Ketu. Since Mercury who is Vargottama is in the 12th from his own sign he did not have any affinity or attachment to his family and house. Saturn, the 7th lord is in the 11th aspecting the Sun, the Ascendant lord, further confirming this conclusion. The 12th lord Moon in Satabhisha ruled by Rahu is in the 7th with the 5th and 8th lord Jupiter. These planets also aspect the Ascendant which indicates astounding intuitive powers. Jupiter, the 2nd lord from the Moon-sign is in the Moon-sign itself aspecting Mercury, the 2nd lord from the Ascendant. This creates a strong relationship between the 1st, 2nd, 5th and 12th lords which is advantageous for Sanyasa Yoga. One with such planetary positions is said to possess great knowledge.

The 4th and 9th lord Mars is in the 12th aspecting the 6th house, the 12th lord Moon and the 8th lord Jupiter. Mars is in the 7th lord Saturn’s Nakshatra⭐and Jupiter in that of Mars. All knowledge that he had was self-acquired The Ascendant lord Sun and 2nd and 11th and not received from any teachers. Venus lord Mercury form Budhaditya Yoga. It is said to be debilitated in the 2nd from the Ascendant and the Guru’s face was always bathed in a bright in the 8th from the Moon-sign produces a powerful Sanyasa Yoga. At the same time, Venus and Mars cause two powerful Neechbhanga Rajayogas in addition to the Gajakesari Yoga due to Jupiter and the Moon. Further Saturn aspects the 5th and the 8th from the Ascendant while the 5th lord Jupiter aspects Saturn from Aquarius resulting in Gurumanda Yoga which made him world-famous, though born in a segment of society in Kerala which in those days was declared untouchable. Sri Narayana Guru believed in practicing what he preached.

Venus is debilitated in the 2nd and this position has two interpretations. One is that he talked less and put his ideas into practice unlike great orators like Swami Vivekananda. In fact, he was actually a poet and conveyed his ideas through poems that needed Sanskrit scholars to be correctly interpreted. This position of Venus also indicated his laser beam-like X eyes which penetrated everyone’s mind. He was born on a Full Moon day indicating very clear positive thinking.

Sri Narayana Guru lost his mother at the age of 15 during Jupiter Dasa, Mars Bhukti. The 4th house represents mother and the Moon is the Mathrukaraka who is in Satabhisha ruled by Rahu who is in the 9th which is the 6th from the 4th indicating the mother’s death. Rahu in Aries can give the effect of Mars who is debilitated and in the 12th aspecting Jupiter and the Moon showing danger to mother. Jupiter is in a Martian Nakshatra. Therefore Jupiter Dasa. Mars Bhukti proved dangerous to the mother in 1870.

Sri Narayana Guru’s enlightenment can be speculated as having occurred in Saturn Dasa, Mars Bhukti in 1885. Astrological ly. such events can occur only during the Dasas or Bhuktis of the 4th, 5th, 9th or 12th lords. The 5th lord Jupiter is in the Nakshatra of Mars (4th and 9th lord) aspected by Mars from the 2:h Jupiter also aspects Saturn who is in the 11th Saturn is also the 12th lord from the Moon-sign aspecting the Ascendant. According to the Guru’s biography, this event took place in his 30th year.

The consecration of his revolutionary Aruvippuram Siva idol on March 10, 1888, which led to his entry into the Sivagiri hills marked his social reformation movement. This was in Saturn Dasa. Rahu Bhukti. The 9th house Rahu should give results such as awards, recognition, etc., Sri Narayana Guru came to the notice of the public only by this time.

Sri Narayana Guru gave up his mortal frame on a Thursday on September 20, 1928, at 15h. 30m. in Anuradha Nakshatra ruled by Saturn. Venus, the Dasa lord, is in a Maraka place in the Nakshatra of 12th lord Moon. He attained Samadhi in Saturn Antara and Bhukti of Venus Dasa.

The Guru did not found any new religion but propagated the principles of Advaita like Bhagavan Sri Ramana Maharishi. When Sri Narayana Guru met Ramana Maharishi at Tiruvannamalai in 1926, the Maharishi was astonished at meeting one who had realized the Ultimate Truth. His concepts about God are explained in two of his works Atmopadesasathakam and Deivadasakam. •