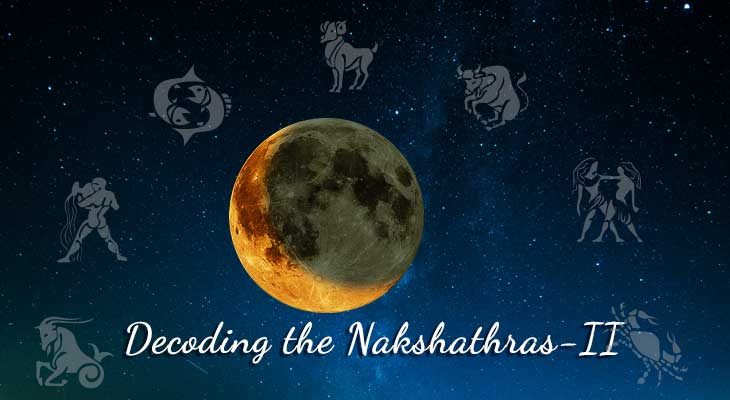 The second step is to understand the symbols and the deities of the Nakshatras. In order to understand the qualities of the deities, the Puranas have to be read in detail as they give major clues on the inner wish that the planet is carrying. The symbols given for each Nakshatra by ancient masters are a form of “repository” used to conceal information and to imply things rather than reveal explicitly. Let us look at a few examples of how to correlate symbols and qualities of deities of each Nakshatras to aid prediction.

Example 1: Krittika Nakshatra’s deity is Agni with a razor as its symbol. Agni as a deity is known to carry both the constructive and destructive potential with the primary motivation of activating the hidden talent in the individual by burning the dross. The razor is a sharp-edged instrument that can be used to harm in a war or can be used by a surgeon on a patient. The nature of the results from this Nakshatra depends on the nature of the planet that uses this razor. Rahu is said to create explosions in personal relationships while the Sun is said to give very sharp intelligence along with some disappointment in personal relationships.

Example 2: Poorvaphalguni Nakshatra s deity is Bhaga with the couch/platform as its symbols. Bhaga as a deity is known to bestow wealth and prosperity and this is said to be the necessary result of its primary motivation Trishna, thirst or strong longing and desire. The symbol couch is indicative of a resting place and the platform indicates the readiness of the natives to involve in worldly activities. The planet in this Nakshatra rests the soul by making the native ambitious, purposive, calculative, dominating and acquisitive. Mars in this Nakshatra makes one extremely passionate about the endeavors of his life, often tilting towards self-centeredness.

Example 3: Chitta Nakshatra’s deity is Vishwakarma (Tvastra) with the pearl as its symbol. Vishwakarma also is known as Tvastra (literally means builder) as a deity is known to bestow new thoughts and a strong urge to build something of one’s own with a mind capable of delving deep in exploring the hidden mysteries of Nature. The pearl as a symbol represents obtaining inner consciousness through the ordeals of life, i.e., a shining pearl is always obtained after the hard outer shell of an oyster is broken. The planet in this Nakshatra is said to give Self-realization through secret knowledge and a deep urge to be a shining star by building something on one’s own.

Example 4: Sravana Nakshatra’s deity is Vishnu with the ear/arrow as it§ symbols. Vishnu as a deity is the Preserver of the Universe and is known to bestow obedience, full faith in higher truths of life and an inclination for servitude. The ear as a symbol represents listening to the unknown and indicates silence with a meditative attitude and the arrow indicates single-pointed focus towards a goal. The planet in this Nakshatra provides a strong urge for obedience, isolation, and silence and imparts a high degree of concentration. Rahu in Sravana pushes the native towards isolation by creating disappointing situations during its period.

The third and final step is to correlate the three Gunas and the primary impulses of these Nakshatras that have been explained in three evolutionary sequences of the soul in esoteric literature. The 27 Nakshatras have been divided into 3 groups with Rajas Guna being assigned to the first one-third of the Nakshatras, Tamas Guna to the second one third and Sattwa Guna. to the last third as primary.

Learn more about Trigunas and planets

Ashwini marks the beginning of Rajasic tendencies which are primarily concerned with activity, aggression, domination and taking the initiative for necessitating growth to help concretize the life of the individual on a materialistic path; this Rajasic tendency is said to reach the peak at Aslesha Nakshatra here the first triad of the Nakshatras ends. Makha marks the beginning of the Tamasic tendencies which are primarily concerned with inactivity, conflict, and lethargy and such a tendency are said to hit the peak at Jyeshta Nakshatra where the second triad of the Nakshatras ends. Moola takes over from Jyeshta s high Tamasic tendencies and marks the beginning of Sattwic tendencies which are primarily concerned with dissolution balance and sensitivity. For dissolution to happen, the already acquired egoism and am gance have to come to the surface for greater spiritual sensitivity to unfold. Hence. Moot inflicts pain for the greater good and the process of merging everything back into the source from where it all began; this tendency is said to hit the peak at Revati Nakshatra where the third triad of the Nakshatras ends. Since no Guna exists alone without the other, further each primary Guna has a secondary Guna as its undercurrent with Rajas, Tamas, and Sattwa Gunas distributed to each of the 3 Nakshatras sequentially in every group. Each secondary Guna has a tertiary undercurrent with Rajas, Tamas and Sattwa Gunas distributed sequentially to each of the Nakshatras in every group. The complex nature of its circulatory motion is shown in Table IV.

It is seen from the discussion so far, that the Nakshatras with Rajas Guna show movement upwards. Tamas Guna show movement downwards and with Sattwa Guna, show balance; this evolutionary sequence gives further clues on their primary impulses as well. Some examples make for ease of understanding:

Example 1: Aswini Nakshatra with Rajas Guna running across all 3 levels marks the
beginning of regeneration by imparting knowledge, booty, power, domination, healing touch and a desire to experience various sensations. Duality is the intrinsic nature of the Nakshatras. results would be depending on the evolution of the individual’s soul. Hence, a planet’s primary impulse in Aswini Nakshatra for a lesser evolved native would be to experience various pleasures of worldly life; whereas for a higher evolved native, it imparts a determined spirit and strong leadership qualities in order to achieve, dominate and impress.

Example 2: Aslesha Nakshatra with Rajas Guna a: a primary level and Sattwa running across- the other two levels indicates the peak of reaching materialistic desire which began at As • – (it is the final Nakshatra of the first triad where Rajasic tendencies end), making the lesser evolved native to be immoral, selfish, arrogant, fickle and untrustworthy; whereas, carrying Sattwa Guna as the undercurrent, makes the er.at:\e more balanced, caring and acceptable of one’s situation by imparting higher and secret knowledge.

Example 3: Makha Nakshatra with Tamas Guna at the primary level and Rajas running across the other two levels indicates the beginning of the conflict between movement and inactivity due to the change in the primary Guna from Rajas to Tamas. This conflict is set to create much psychological frustration and restlessness to a lesser evolved native; whereas, it is said to provide a suitable environment for soul transformation to the evolved native. 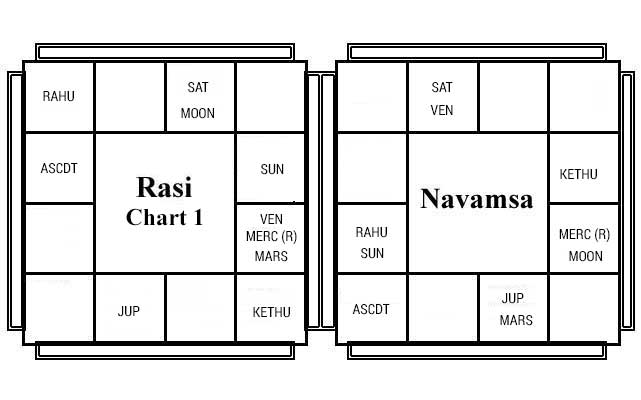 Chart 1 is of Dr. B. V. Raman, Father of Modem Astrology, who single-handedly revolutionized and institutionalized Hindu astrology in the last century. Almost all the great astrologers in the world have analyzed his chart and given their inputs. Here, a few points using the qualities of the Nakshatras as discussed above occupied by the Ascendant, the Ascendant lord. Moon and the Sun will be analyzed as they are the core pillars of any horoscope.

The Ascendant rises in Aquarius in Satabisha Nakshatra with Brahma as a deity. The Moon being in Mrigasira with Mars as its ruler and Soma as its deity provides great sensitivity and enlightenment and the Sun in Aslesha Nakshatra with Mercury as its ruler and the Nagas as their deity, who are said to be the custodians of secret wisdom, confirms it to be of a special birth, again with a Divine purpose. Another important striking feature of this horoscope is except the Sun and Venus all the other 7 planets are in female Nakshatras activated by male planets Jupiter, Mars, and Ketu keeping him active throughout his life with none of them having their motivating impulse as Artha (generating wealth). The female Nakshatras are least interested in Artha as their primary motivation indicating that generating wealth and power was not of a primary motivation as confirmed by the Ascendant, Ascendant lord, Moon, and the Sun. Anyone who has known Dr.Raman personally would confirm the above findings that his birth was not one of generating wealth or acquisition of power but was full of foregoing personal comfort for a greater cause, receiving an influx of intellectual teachings and decoding secrets of Nature through ancient astrological texts as the primary motivation all through his life.

The native of Chart 2 is an exponent of the Vedas with a profound grasp of ancient wisdom and having an impersonal approach to life with scores of admirers and well-wishers around him. The Ascendant being Vargottama in Capricorn in Uttarashada Nakshatra with the Sun as its ruler and Vishwadeva as its deity bestows qualities such as extreme humility by making an evolved native view the world itself as God but with the quality of self-centeredness in lesser evolved natives. The Ascendant lord Saturn is in the house of Karma in exaltation forming a Sasa Mahapurusha Yoga in Chitta Nakshatra which has Mars as its ruler and Vishwakarma as its deity and Tamas Guna running at all 3 levels. Vishwakarma as a deity is known to bestow pioneering thoughts and a strong urge to build something of his own as a contribution to society with a very stable mind in exploring deeper secrets of Nature. 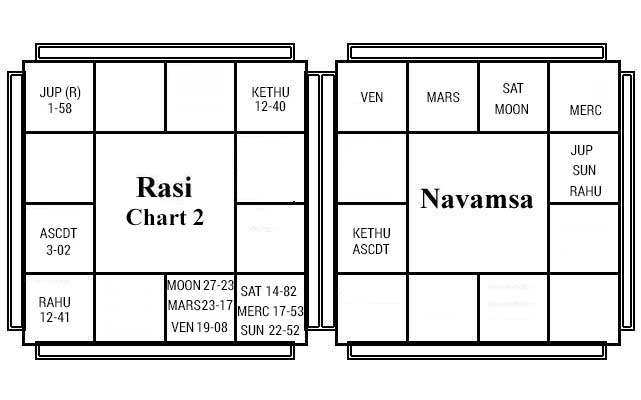 The Moon being in Dhanishta Nakshatra with Mars as its ruler and Vasus as its deity is said to bestow spiritual proficiency and liberation by destroying the materialistic base. The Sun in Moola Nakshatra with Ketu as its ruler and Niritti. the Goddess of destruction and darkness, as its deity is said to be ending the materialistic urge by initiating a strong urge for the new spiritual endeavour.

Another striking feature of this horoscope is the presence of Amsavatara Yoga. Whenever a birth takes place in moveable signs (cardinal) with being in exaltation and Jupiter and Venus in mutual Kendras to Saturn, the individual is said to have been born is Amsavatara Yoga. According to classics, such a native’s life would be blemishless, with profound wisdom in ancient tradition and a large number of people at his command; however, such a Yoga tends to destroy materialistic propensities giving much hardship in personal life.

The Ascendant, Ascendant lord, the Moon and the Sun along with Amsavatara Yoga confirm that the birth has taken place to forego materialistic comforts and tread on a higher spiritual path with a deep urge to build something of his own for society. The native who is highly learned took early retirement from his mundane endeavors fired with the spiritual urge dedicating his life to worshipping Goddess Lalita Parameshwari. He is currently building an Ashram with a temple for the Goddess in it and this has been the major driving force throughout his life as indicated by the strong Ascendant lord Saturn in Chitta Nakshatra. Humility, a deep urge for liberation, spiritual studies and Sattwic Guna dominate every sphere of this very blessed native’s life.