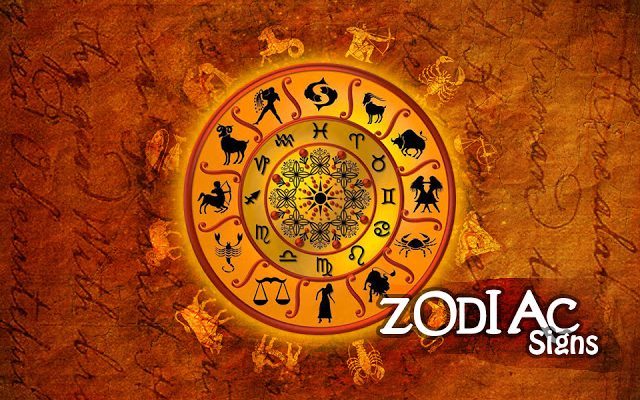 Earth rotates on its axis once every 24 hours. At the same time, the earth revolves once around the sun in one year. This movement of earth makes us feel that the sun is moving around the stars. This imaginary path of the sun is called the Ecliptic. The sky path extending to about 8 degrees on both sides of Ecliptic is called Zodiac. This resembles a belt. We feel that the moon and other planets move in this zodiac. Since earth exists in this solar system the stars and planets in the zodiac belt influence us.
Zodiac is a circle. In order to understand the position of stars and planets in this circle, a starting point is necessary. Hindu astrology estimates that the first degree of the circle starts from the end of the last Pāda of the last star in the constellation, Revathi. From this starting point, the circle has been divided into 12 equal parts of 30 degrees each. These 12 parts are known as Mēsham, Vrishabham, Mithunam, Karkātakam, Simham, Kanya, Tula, Vriśchikam, Dhanussu, Makaram, Kumbham, and Meenam.
There are 27-star constellations in the zodiac. These 27 constellations exist in 12 Rāśis. Thus there are 2 ¼ stars in one Rāśi. (12 x 2 ¼ = 27). Indian astrology is based on 27 stars and 9 planets.
Nine planets:
Sun, Moon, Mars, Mercury, Venus, Jupiter, Saturn, Rāhu and Kētu are the nine planets. Among these Rāhu and Kētu do not have physical existence as they are only shadow planets.
Previous: Factors of astrological time calculation